The Marketing Skills of Tomorrow

Key Insights
Let’s analyse the specific skills and capabilities for the marketing population, their strengths, weaknesses and the skills of tomorrow.
Download Full Report

The Marketing Population as a whole
We found that questions on their ambitions for capabilities consistently scored highly, systematically scoring over 3 out of 4.

Similarly, questions regarding independence from external parties, such as agencies, also consistently score an average score over 3 out of 4.
‍
Whereas, when it comes to the questions on the reality of their skills - their performance over their ambition, respondents systematically scored below 3.

Questions on ambition score consistently high, with an average of above 3.

Questions on performance score systematically below 3
Common Weaknesses
There were three key areas of weakness amongst the marketing population. When asked about the following statement, the average score was:
Area of weakness #1.
Last month we ran 10+ experiments
Average

1.73 / 4
Marketing Talkers vs Doers
We wanted to know if there were clusters within this population, groups of people who answered questions similarly. Our data analysis shows that there are two clearly differentiated groups. What makes them different? Basically, some people are ‘Doers’ and others are ‘Talkers’.

Essentially, the difference between the two groups is that while both groups  have similar ambition scores. When it comes the reality of their skills, the Doers score significantly higher compared to the Talkers, who score consistently lower.

Talkers vs. Doers - The Key Differences

We analysed the most acute gaps in capabilities between the Doers and the Talkers (score out of 4).
‍
We found the following showed the greatest variance. With a topic focus around data- led ways of working:
Having a clearly developed data strategy
Doers

What the Marketers say

Finally, we asked the marketers for their input on capabilities.

We asked 1269 marketeers
Are there any capabilities which are important to you or your team that you would like to add?

We asked 1269 marketeers
What are the biggest challenges you're facing in the coming year?

Transitioning online
The Marketing Skills of Tomorrow
Move from a talker to a doer by addressing these key skills of tomorrow:

Jim collins in his book, Good to Great, set out to discover what made some companies go from being good to great. He embarked on a five-year study of eleven companies whose stock returns had skyrocketed relative to their competitors. There were several important factors, but one of the most important was the type of leader who led the company into greatness. They were not the larger-than- life characters who were full of ego and self-proclaimed talent.
‍
They were modest people, who constantly asked questions and had the ability to confront brutal answers. To look failure in the face, even their own, with the belief they would succeed in the end.

This is fundamental to addressing skills, as Growth Mindset leaders and teams are constantly looking to improve. They face their own weaknesses and ask frankly what skills do they and the company need in the future. Having a Growth Mindset enables them to move forwards based on facts, sometimes facing hard truths that there are skills gaps, not unfounded fantasies about their talent or abilities.
‍
What sets apart the doers is that they constantly learn, they believe that skills can be developed, they face up to and accept mistakes and failures, and alter their strategies accordingly.
‍
Having a Growth Mindset then, is the skill of skills. It is fundamental to being open to learning and developing skills as an individual, as a team and an organisation.

A key feature of a Growth Mindset organisation, or a learning organisation, is the number of experiments that they run, and is a key skill for high performing teams and organisations.

Despite being awash in information coming from every direction, today’s managers operate in an uncertain world where they lack the right data to inform strategic and tactical decisions. Consequently, for better or worse, our actions tend to rely on experience, intuition, and beliefs. But this all too often doesn’t work. And all too often, we discover that ideas that are truly innovative go against our experience and assumptions, or the conventional wisdom.
Stefan H. Thomke - Author, Experimentation Works 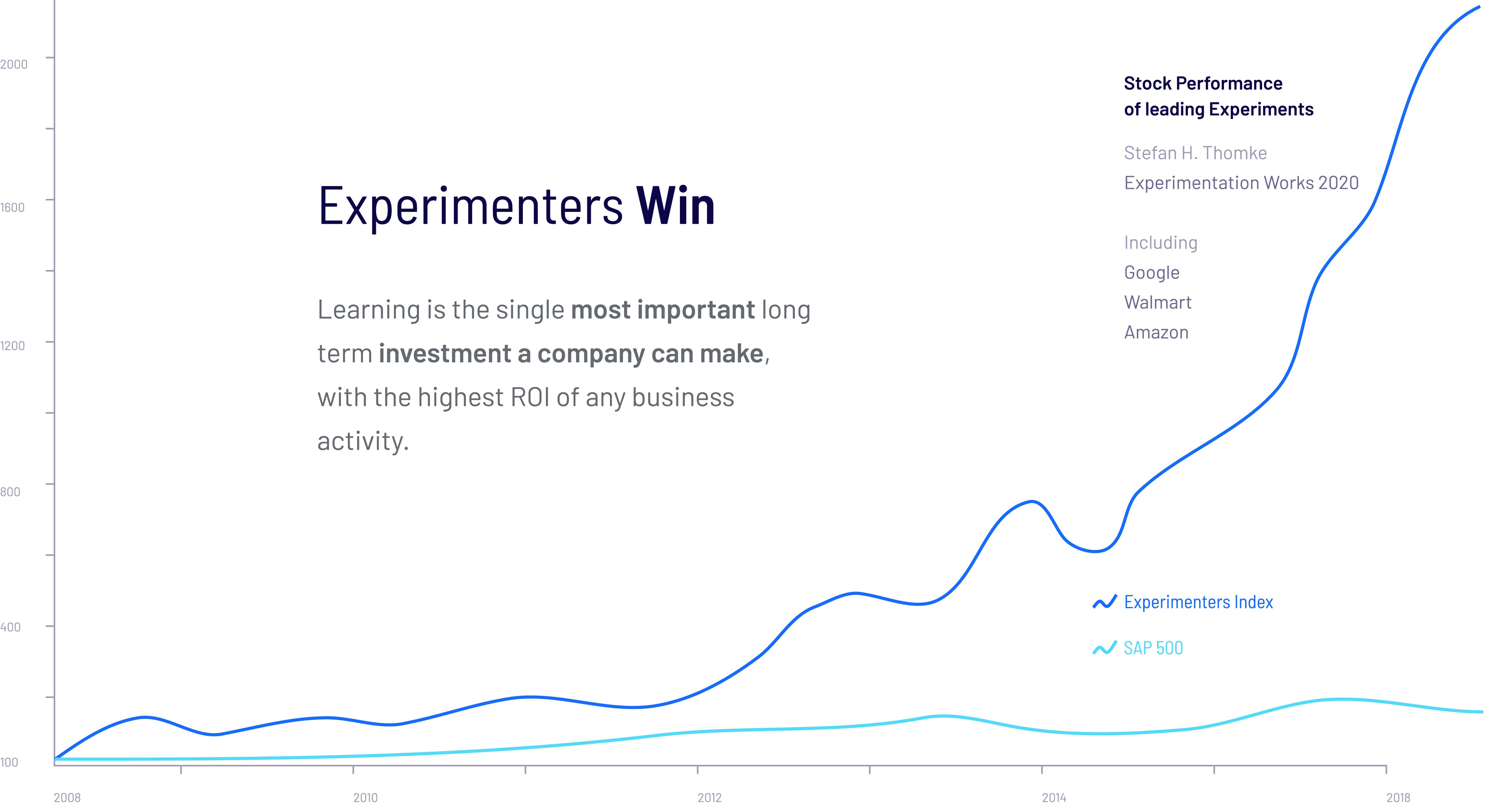 How do we run experiments?
Watch our video and find out more about running growth experiments, with a clear process so you too can be an experimental, learning organisation.

Sharing learnings is also a feature of a Growth Mindset organisation - learning from peers is a hugely effective way to improve skills and knowledge for the success of your teams.

In fact, estimates suggest that the companies in the Fortune 500 still lose a combined $31.5 billion per year from employees failing to share knowledge effectively.
‍
This requires effective leadership and fostering a culture of sharing learnings through accessible spaces, meetings and processes.

Attribution models also came out as an important tool to master. Customers never follow linear journeys when buying a product, and will come across multiple touchpoints in your marketing efforts.
‍
Attribution models simply provide a way to measure which channels and activities are delivering the greatest return on value. So you can learn which efforts to focus on to deliver greater returns.

Create a strategy after running pilot projects, use data from experiments, apply insights to the next experiments. Repeat.

We live in a world where technology has enabled data collection on a scale never before seen. Yet, the greatest shortcoming is that leaders and teams are not using this data to gain insights and drive decisions. There is simply a lack of skills, as highlighted by our findings here.

Answer these 6 key questions to build your data strategy and become a date led marketeer.

Are there any capabilities which are important to you or your team that you would like to add?
What are your strategic marketing priorities and how can data help you achieve this?

What data do you need to answer your questions?
What data will help you solve your objective, and what do you have already that you can use?

How will you analyse the data?
What tools will help empower your data strategy? How will you store your data and protect it? Will you use the cloud?

How will you report and present insights?
Data is useless if the key insights and learning are not shared to key stakeholders to impact decision making.

What hardware and software do you need?
What are your strategic marketing priorities and how can data help you achieve this?

What’s your plan of action?
Once all of the above has been answered, you then need to create a plan to implement your data strategy. How will you get it off the ground?
The mistakes to avoid!
Watch our video on mistakes to avoid for data-driven marketing, to learn more.

This lite version of our capability analysis software is designed to help you understand your teams growth capability gaps. It takes around 15-20mins.
Take the Scan! 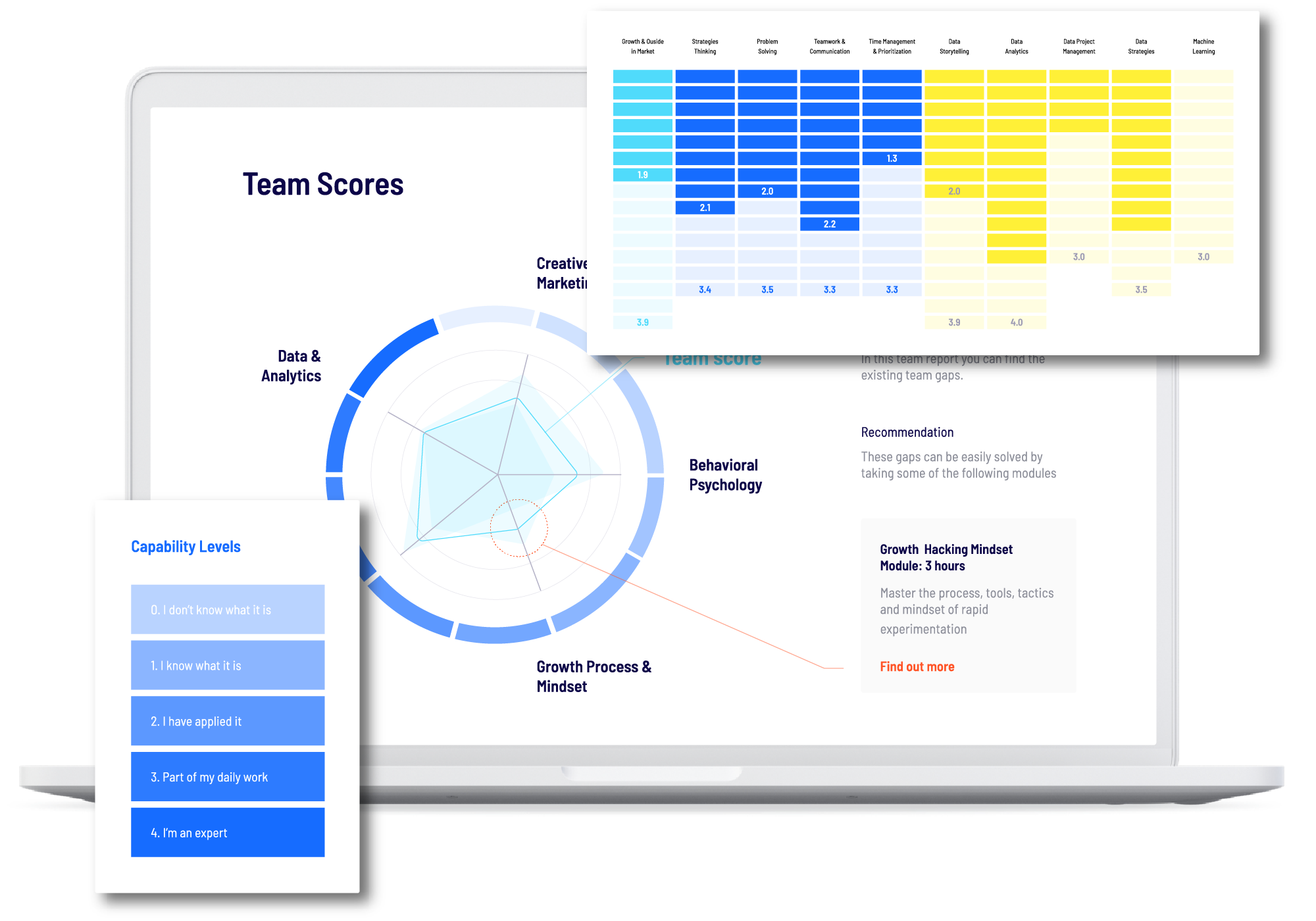